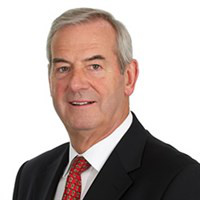 Lord Smith is one of Scotland’s leading business figures. He holds the chairmanship of both SSE and the UK Green Investment Bank and was chair of the organising committee for the hugely successful Glasgow 2014 Commonwealth Games.

Robert Smith was educated at Allan Glen’s School before qualifying as a Chartered Accountant in 1968. He went on to work for the Industrial and Commercial Finance Corporation – now the 3i Group – before holding senior posts with National Commercial and Glyns Ltd, the Royal Bank of Scotland and Charterhouse Bank. He was also chair of the Weir Group.

He joined Morgan Grenfell in 1989 as CEO and Chairman and spent 12 years with the company. During this period, he also served as Chairman of National Museums of Scotland, President of the Institute of Chartered Accountants of Scotland and a Governor of the BBC. In 1999, he was knighted for services to Scotland’s museums.

He became a member of the House of Lords in 2008, as an Independent Crossbench Peer. He is also President of the Royal Highland and Agricultural Society of Scotland, a Regent of the Royal College of Surgeons and Patron of Foundation Scotland – formerly the Scottish Community Foundation.

Lord Smith was appointed Chancellor of Paisley University – now University of the West of Scotland – in 2003, a position he held until September 2013. He holds honorary degrees from the Universities of Edinburgh, Glasgow and West of Scotland. He is married to Alison, Lady Smith, and has two daughters.