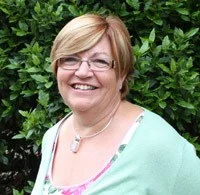 Sally Scott comes from a background in education in both the secondary and primary sector and also across independent and state schooling.  She has held two Headships during which time her leadership was described as “inspirational” by OFSTED.  As well as work in schools she has also acted as a County Maths Advisor which involved her training teachers and schools how to teach maths.

Before that she was a commissioned officer in the WRAC and an army wife.  She is a linguist with fluent French and German and passable Spanish.  Now retired, she spends her time working with the elderly and homeless in Winchester and in her spare time she is a textiles artist who exhibits locally and nationally.  Prior to becoming a Champion, Sally was Trustee and Deputy Chair of DMWS for over 3 years.  She is married to Chris and lives in Winchester.