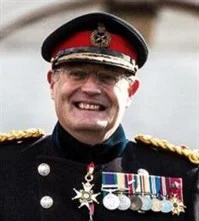 Lieutenant General Sir Mark Mans was commissioned into the Corps of Royal Engineers and in a long and varied military career saw regimental and operational service worldwide.  He rose to high rank and held a number of senior appointments including Adjutant General to the Forces and Chief Royal Engineer.

Sir Mark is now pursuing a portfolio career as an independent consultant and also devotes much of his time to charity work.  In addition to being a Hampshire Deputy Lieutenant, he is the County Patron of The Royal British Legion, a Trustee of the Nuffield Trust for the Forces of the Crown, a Patron of the Veterans in Action charity, a Vice Patron of the Ulysses Trust, a Champion for the Defence Medical Welfare Service and is a member of the Scientific Exploration Society.