Initially, during World War I, the Joint War Committee was formed, drawn from The Order of St John of Jerusalem (The Order) and the British Red Cross Society (The Society). The committee was tasked to provide personnel to assist the medical officers in military hospitals worldwide, including on deployment in field units.

In 1919, the Joint Council was established between the Order and the Society, which enabled their work to continue during times of peace.

Welfare officers were funded by a combination of the Joint Committee’s funds and ‘grant in aid’ support from the War Office/Ministry of Defence.

In 1944 the Joint War Committee and the Joint Council were amalgamated, creating The Joint Committee of the Order of St John of Jerusalem and the British Red Cross Society – thereafter known as the Joint Committee. The committee was tasked to provide welfare support in Service hospitals and medical facilities all over the world. They later became known as the Service Hospital Welfare Department (SHWD) and adapted their role to complement and underpin the clinical work of their medical colleagues. Wherever the Military were, our welfare officers would also be found, working within both established and field medical units. The Service Hospitals Welfare Department was chaired by Edwina, the first Countess Mountbatten and the wife of Lord Louis Mountbatten. 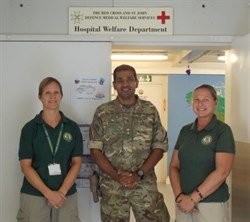 After the Second World War, the Service Hospitals Welfare Department continued to provide welfare services in Military Hospitals wherever the British Armed Forces were located around the world, including Aden, Palestine and Egypt.

Between 1980 and 1991 Patricia Knatchbull, the second Countess Mountbatten chaired the Joint Committee from which the Defence Medical Welfare Service emerged as a separate organisation in 2001.

DMWS remained the only military charity and civilian welfare organisation to deploy to areas of conflict with the Armed Forces, working alongside medical staff in the Field Hospitals in Bosnia, Kosovo, Iraq and Afghanistan. 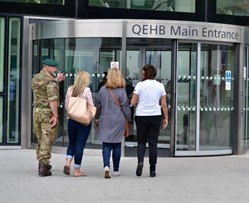 The closure of British Military hospitals in recent years means that service personnel are now treated in NHS hospitals in the UK or within secondary care health providers (local hospitals or clinics) if they are overseas. Depending on the nature and severity of the service person’s injury or illness when abroad, they may be flown back to the UK for further treatment. Patients are currently received, assessed and treated at the Queen Elizabeth Hospital Birmingham (QEHB), which has been designated a Major Trauma Centre to treat the most badly injured patients. 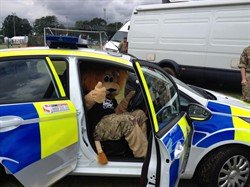 DMWS continue to have a presence in Cyprus and Northern Ireland supporting the Service community as well as engaging with Armed Forces personnel in rehabilitation centres in Shropshire.

Since 1943 DMWS has been providing medical welfare support to the Armed Forces Community. In order to retain the humanitarian ethos of both our parent charities and to adapt to changing requirements, DMWS evolves constantly to meet new needs. In recent years we have extended our welfare support to other beneficiaries on the frontline such as the police, the probation service and the NHS.

We have also taken our knowledge, experience and skills and have successfully created a comprehensive portfolio of wellbeing and welfare training, which offers both preventative and interventional strategies for those helping others in a welfare setting.